Not Just Smoke and Mirrors: How immune cells protect the lungs from cigarette smoke damage

If you were alive in the past few decades, you likely remember a time when restaurants, bars, bowling alleys, and other establishments had separate smoking and non-smoking sections. While most of these places have now implemented indoor smoking bans, smoking is still a prevalent habit, with nearly 40 million adults and 4.7 million middle and high school students in the United States using tobacco products, according to the Centers for Disease Control and Prevention. More and more information has been revealed over the years about the health impacts of smoking, and researchers continue to focus on how smoking impacts our lungs, bodies, and immune systems and how we can develop long-term diseases, such as emphysema or chronic obstructive pulmonary disease (COPD), as a consequence of smoking habits. Researcher Nadia Milad and her colleagues at the Université Laval in Quebec, Canada sought to investigate this exact topic. In an article published earlier this year, Milad et al. showed that a specific type of immune cell, the neutrophil, plays a critical role in protecting our lungs after exposure to cigarette smoke.

Neutrophils are an important player in our body’s defenses against toxic or infectious insults. They are best known for their ability to swallow foreign objects such as bacteria, toxins, or damaged cells in a process called phagocytosis. They then break those substances down and remove them from our body. Milad et al. were extremely interested in this neutrophil characteristic. Since a main job of neutrophils is to clear debris, this research team thought that neutrophils may play a helpful role in clearing damaged parts of the lung after exposure to cigarette smoke. Researchers were specifically interested in a fat-based substance called surfactant, which lines the inside of our lungs to provide protection, help keep our lungs dry, and help our lungs expand and contract when we breathe. However, surfactant can be damaged with cigarette smoke exposure. This can cause an inflammatory immune reaction and alter the composition of the surfactant layer, changing critical properties that help us breathe and protect us from developing airway diseases. These researchers hypothesized that neutrophils are recruited to areas of the lung that have been in contact with cigarette smoke in order to help clear damaged surfactant and keep our bodies from mounting a more excessive inflammatory reaction.

Milad et al. took advantage of a commonly used animal model for research, the mouse, to help answer their questions. They exposed mice to cigarette smoke for two hours a day for four straight days and then collected cells from the mouse lungs to conduct their experiments. They demonstrated that neutrophils from the lungs of mice exposed to cigarette smoke were able to internalize components that make up lung surfactant. In contrast, unexposed mice had virtually no neutrophils present within the population of collected lung cells, indicating that neutrophils are actively recruited during cigarette smoke exposure to help clear damaged surfactant.

It is important to remember that our immune response is not a one-cell show. Many different cell types communicate with each other within the lung environment to help respond to foreign substances such as cigarette smoke. Immune cells talk to each other via molecules called cytokines. Cytokines are produced by immune cells and serve as messages between different cells, signaling when there is danger and rallying our immune cells to respond. One specific cytokine, IL-1ɑ, sends a specifically strong message to our immune cells to mount an inflammatory response and clear damaged cells. IL-1ɑ is also known to play a role in recruiting neutrophils to sites in the body where they are needed, and also stimulates lung cells to produce more surfactant.

One cell type that is well-equipped to send out this IL-1ɑ alarm is called the macrophage. Macrophages lie waiting in our tissues to help be first-line defenders against infection or toxin exposure. They are great messengers, producing many cytokine signals, including IL-1ɑ, to help communicate with other cells. Macrophages also have the ability to help clear debris. Thus, macrophages typically work closely with neutrophils during an immune response. When exposed to cigarette smoke, macrophages increase their production of IL-1ɑ, sounding the call to bring in neutrophils for help. However, cigarette smoke also causes macrophages to get larger in size and become full of fats. This makes the macrophages function less efficiently at clearing debris, and the accumulation of these fat-filled cells can actually cause damage to our tissues.

Working together: the relationship between immune cells in the lung

Milad et al. wanted to further explore the relationships between neutrophils, macrophages, and their IL-1ɑ messages. They chose to explore what would happen if they either 1) significantly reduced the number of neutrophils present in the mouse lung or 2) blocked the IL-1ɑ message from being transmitted. If neutrophils and IL-1ɑ play a critical role in the immune response after cigarette exposure, depleting neutrophils or blocking IL-1ɑ should put the immune response out of balance. When neutrophil numbers in the lung were decreased, components of lung surfactant were increased. In contrast, when IL-1ɑ signaling was blocked, these surfactant components were significantly decreased (Figure 1). This demonstrated to the group of researchers that IL-1ɑ provides neutrophils with instructions for regulating lung surfactant after cigarette smoke exposure, and that neutrophil responses are dependent on intact IL-1ɑ messaging to keep the immune response in balance. A lack of neutrophils means that damaged surfactant does not get cleared appropriately, and blocking IL-1ɑ signaling means that neutrophils aren’t appropriately recruited to the lung and other cells in the lung aren’t stimulated to make more surfactant to help repair damage. 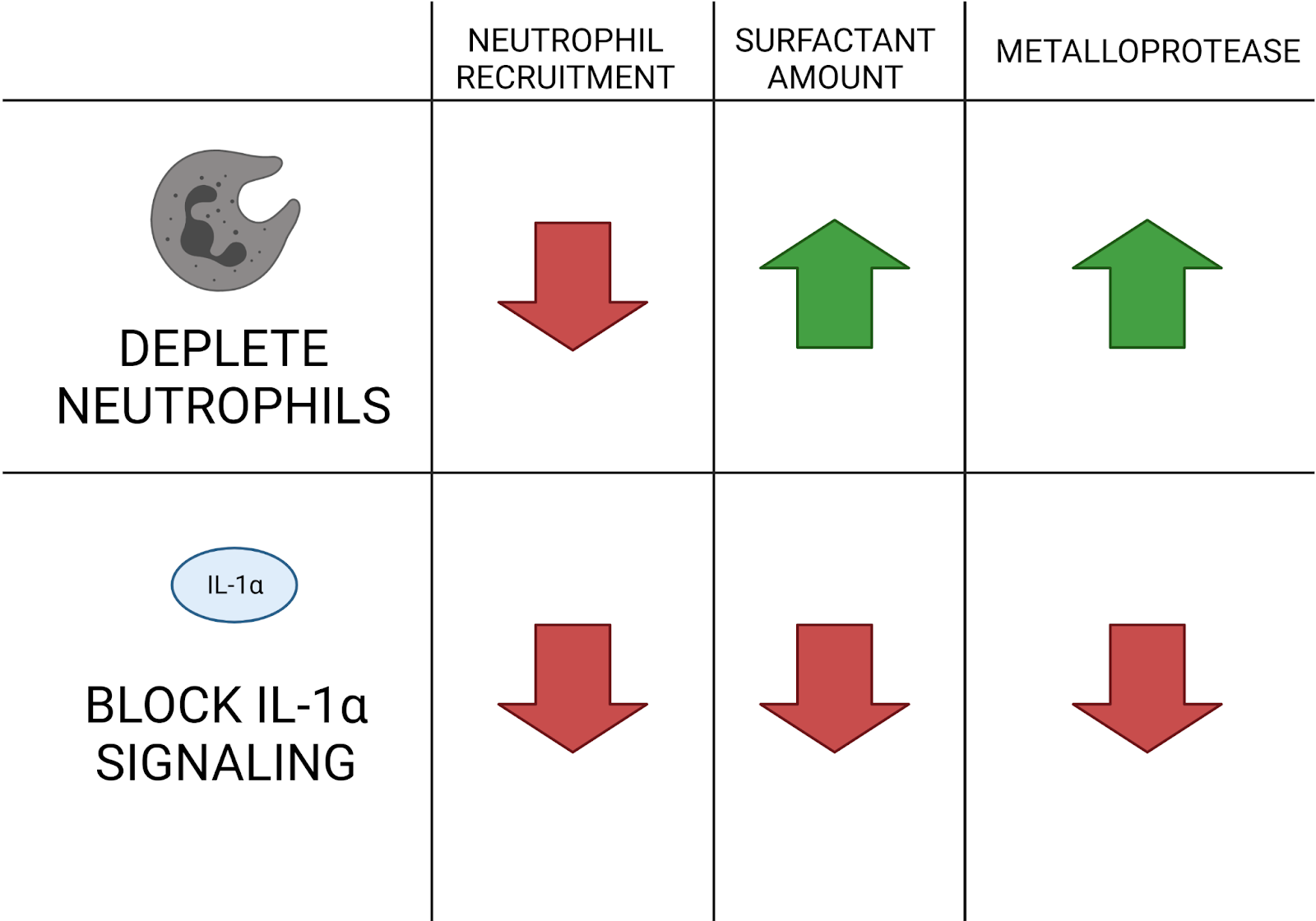 Figure 1: Effects of Neutrophil depletion and IL-1α blockage. Depletion of neutrophils and blocking IL-1α signaling have different impacts on the lung after cigarette smoke exposure. This research team showed that there are important relationships between neutrophils, macrophages, and IL-1α that must be regulated and functioning properly in order to protect our lung surfactant from cigarette smoke damage. Image created using BioRender.com.

Additionally, when this research team decreased the number of neutrophils in the mice exposed to cigarette smoke, they found that the macrophages increased their production of a substance that breaks apart proteins called a metalloprotease. In contrast, this metalloprotease decreased when the signaling molecule IL-1ɑ was inhibited (Figure 1). This specific metalloprotease has been linked to the development of a lung disease called emphysema, which is also associated with smoking, and has the potential to break down proteins that make up our protective surfactant layer. This is a double edged sword as it can be helpful to break down damaged surfactant to improve its ability to be removed. However, out of balance production of metalloprotease could result in breakdown of normal, healthy surfactant. This showed Milad et al. that neutrophils and macrophages must send tightly regulated messages to each other to help respond to cigarette smoke exposure and maintain an appropriate and balanced immune response.

Milad et al. were the first to demonstrate that neutrophils play an active role in maintaining appropriate surfactant levels in the lung, that they are recruited to help when the lung has been exposed to cigarette smoke, and that if neutrophils are not present, the immune response to cigarette smoke is negatively altered (Figure 2). This is significant because researchers have previously thought that neutrophils themselves negatively contribute to lung damage after cigarette smoke exposure. Milad et. al. provide an alternative train of thought suggesting that neutrophils provide the benefit of clearing damaged surfactant and that their communication with other immune cells, like macrophages, is critical to prevent inflammatory responses from getting out of control. While this study only looked at short-term cigarette smoke exposure and did not completely eliminate neutrophils from the mice used in the experiments, this research still provides important contributions to our understanding of the lung’s immune response to cigarette smoke. A better understanding of these processes can help scientists develop new treatments to help reduce or reverse damages caused by cigarette smoke and help those who have developed chronic conditions from the use of cigarettes have a higher quality of life. 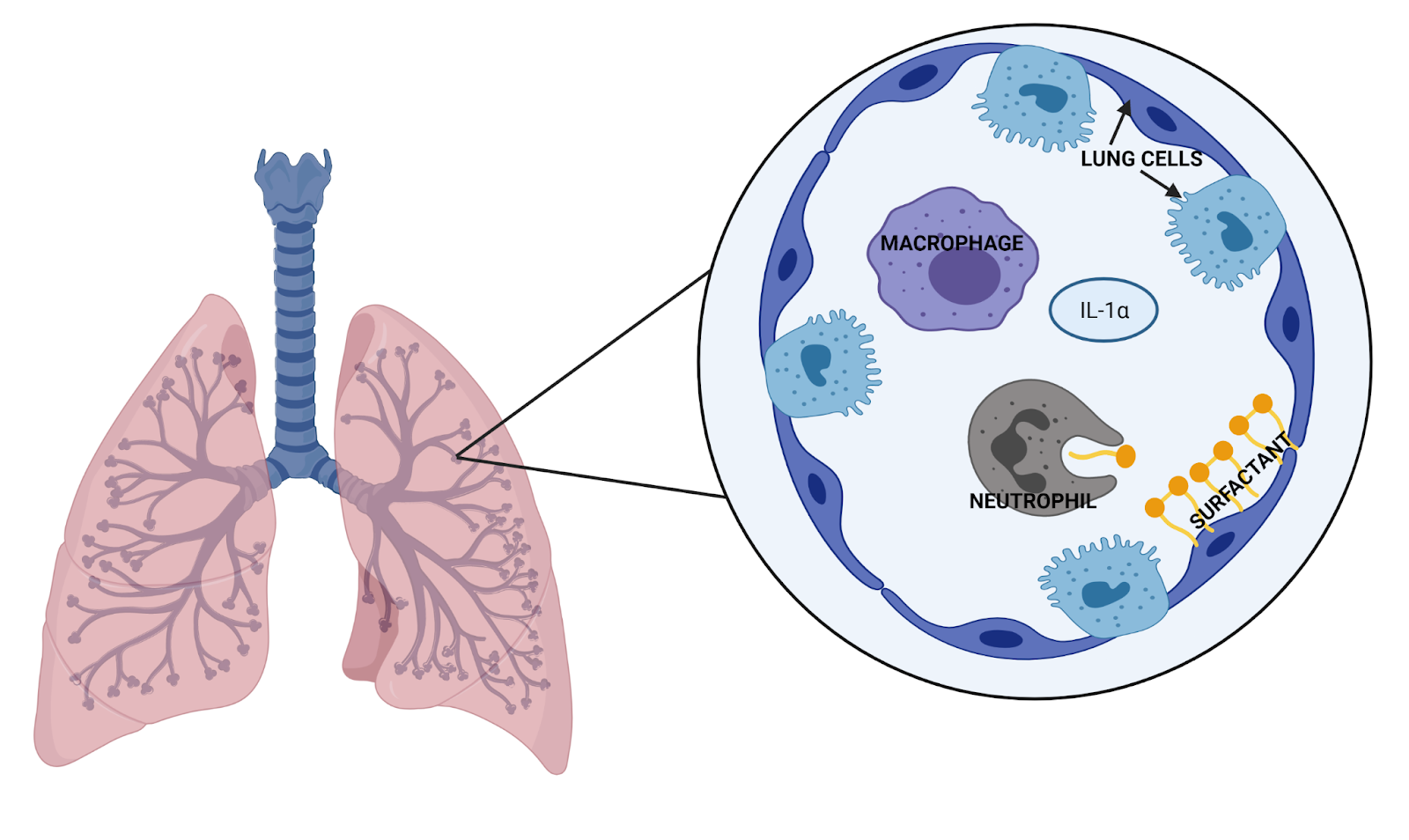 Figure 2: Immune Cells within the Lungs. Neutrophils play an active role in clearing damaged lung surfactant after cigarette smoke exposure. Their role in clearing debris is supported by macrophages and messages sent through the cytokine IL-1α. Image created using BioRender.com.