The 2019 Novel Coronavirus: An Emerging Outbreak

The 2019 Novel Coronavirus (2019-nCoV) has been in the news due to its impacts in China and to other countries. The first infection was identified in the city of Wuhan, where quick spread prompted lockdown of the Hubei province, health screening at international airports, and growing concern about a new pandemic. Please note that this situation is still ongoing, and more research and information will be forthcoming. The data and research in this article represent the best available information at this time.

Coronaviruses of the order Nidoviralis and the family Coronaviridae are all spherical, enveloped, non-segmented positive-sense RNA viruses.

Enveloped means that the virus’ genome is wrapped inside an outer covering made of host and viral proteins. This envelope is assembled from the cell membrane of the host cell, plus proteins synthesized from the viral genome. Coronavirus has three envelope proteins it needs for infection and propagation. M-protein is upside-down in the viral membrane and gives the viral membrane its round shape. S-protein binds and anchors the virus to its target cell to initiate an infection, and is responsible for the crown-like appearance under an electron microscope. E-protein is required for the final assembly and release of the virus from an infected cell, making it critical for sustained and communicable infection. M and E proteins are both required to create new viruses and successfully release them from the host cell. 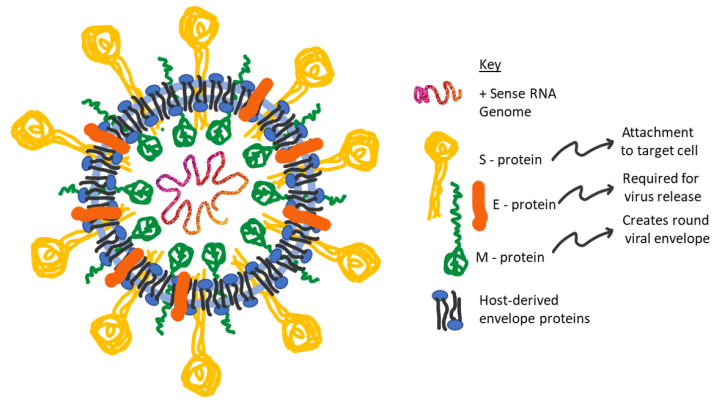 A non-segmented genome is one long strand of RNA material, which codes for all the proteins required for coronavirus to replicate and escape from an infected cell. The RNA genome is wrapped around N-proteins which keeps it compacted into a beads-on-a-string configuration.

Positive sense RNA resembles cellular messenger RNA, meaning it can be translated immediately by host ribosomes as soon as it enters the cellular cytoplasm.

Like all viruses, coronaviruses require the target cell’s machinery for replication. A coronavirus first attaches to a cell via the S-protein, which interacts with its receptors proteins on the host cell surface. Receptors for coronavirus are all naturally occuring proteins with other functions in our cells. The interaction between S protein and its target receptor determines whether or not coronavirus can start an infection.

Once attached, coronavirus has to get inside the cell—into the cytoplasm where it can utilize host machinery to replicate itself. Entry happens when a protease on the target’s surface changes the shape of the S-protein, allowing it to pull the viral envelope and the cellular membranes together, dumping the contents of the virus into the cytoplasm. This fusion event sometimes happens inside an acidified endosome and sometimes directly at the cell’s surface—location depends on the specific type of coronavirus.

Coronavirus’ genome is already in a readable format, so translation of viral proteins can occur as soon as host ribosomes are recruited. The first gene translated is used to replicate the viral genome (replicase), followed by a series of proteins that have many jobs- blocking the innate immune response, recruiting more cellular proteins, assisting in genome copying, and other unknown functions.

Once the viral proteins have been synthesized and the RNA genome copied, it is time for the virus to escape its host cell and move on to infect another cell.  Once the S, E and M proteins have been synthesized, they insert into the endoplasmic reticulum of the host cell and begin to bud, enclosing the RNA genome in an envelope and creating a mature virus. The mature viruses (or virions) then pack into endocytic vesicles and are transported to the cell’s surface where they are released into the environment.

According to the Centers for Disease Control and Prevention (CDC), transmission of the virus is likely similar to that of other coronaviruses: via respiratory droplets that occur after a cough or sneeze within close (~6 feet) proximity.  As of this writing, the virus is known to transmit via infiltration into the mouth or nose, but it’s uncertain if a person can become infected with the virus after touching something that has the virus on it and then touching their mouth/nose/eyes. Interestingly, it’s thought that the most contagious part of the virus’ cycle is when the carrier is the most ill; however, with this coronavirus, there is currently a report of the infection spreading from an asymptomatic patient.  More research will be needed to clarify this, however.

The symptoms for 2019-nCoV may include fever, coughing, and shortness of breath, but the symptoms are variable in intensity and are also variable in onset with the current estimated range of onset at 2–14 days post-exposure. If you have any of the symptoms and believe that you may have been exposed to this virus, please seek the guidance of a medical professional.

One of the best methods to prevent infection is simply by washing your hands with soap and water for a minimum of 20 seconds throughout the day. In addition, avoiding those known to be ill, and staying at home when you are ill also help with prevention. All people should cover their nose and mouth when they cough or sneeze, if at all possible, preferably with something disposable that can immediately be thrown away (such as a tissue).

A Brief History of Coronaviruses

In the 1960’s three independent lines of inquiry into human cold-causing viruses yielded samples of a virus with proteins projecting from its surface—creating a ring, or crown—which was named coronavirus. Coronaviruses infect many species of animals, including (but not limited to) mice, rats,  turkeys, chickens, dogs, and rabbits. Phylogenetic studies suggest that bat coronaviruses may be the ancestor of other mammalian viruses, including human strains.

SARS emerged in 2002–2003 causing severe upper and lower respiratory disease, as well as lethal pneumonia in some patients. SARS fatality rate was around 9%, climbing to 50% in the over-60 years old demographic. The prevailing theory is that SARS originated in bats and may have jumped to Himalayan palm civets and then to people. The SARS outbreak was well-contained due to its low infectivity, and was mostly confined to households and healthcare settings.

In 2012, MERS-CoV emerged in Saudi Arabia. With a fatality rate of ~40%, it caused significant fear of a pandemic. Fortunately, the virus did not reach significant geographic spread—though a 2014 cluster of 200 cases caused a second spike in global concern. In tracing the origins of MERS-CoV, it was discovered that camels are the likely natural reservoir of this coronavirus.

While coronaviruses in general are not new, 2019-nCoV was discovered only months ago. In December of 2019, several clusters of patients presenting with pneumonia of unknown cause were found in Wuhan, China. In an attempt to discover the origin of this pneumonia, samples were collected from infected patients and the viral genomes were subjected to sequencing. Based upon the sequence, scientists were able to place this unidentified virus within the coronavirus family, as it was ~85% identical to a known coronavirus. The differences in the sequence, though, identified this virus as new, and they named this novel virus 2019-nCoV.

Following the discovery of 2019-nCoV, some of the most pressing questions concerned it’s origins: where did this virus come from, and why are we just seeing it now? The circumstances governing the emergence of a new virus are multifactorial, not the least of which is natural selection. Many are familiar with this concept—the idea that organisms change and evolve incrementally, and those changes which enhance fitness are propagated in a population. For example, if an animal who hunts primarily at night acquired a mutation that turned its fur from white to black, it would likely be a more successful nocturnal hunter. We could imagine that this predatorial success would make the animal stronger and more fit that it’s counterparts, leading to more successful mating and the passing down of the black fur mutation to its offspring. In this way, the trait for black fur was “naturally selected” for in the population.

Viruses are no different. In fact, because they replicate very rapidly, they have a much higher chance of acquiring genetic mutations than our black-furred animal above, and so they can undergo natural selection more quickly. Any mutation that increases a virus’ ability to spread and survive will be selected for, such as ones that expand its range to new hosts—and this is precisely what happened in the case of 2019-nCoV. All coronaviruses originated in bats, although it’s possible that the most direct ancestor of 2019-nCoV was an intermediary animal such as camels, cattle, or cats.

In addition to natural selection, another major factor governing the emergence of new viruses is human behavior. Even if a virus, say in bats, acquired a mutation that enabled it to infect humans, would it matter if there were no humans around to infect? No, however, the movement of people into cities and their close proximity to many animals has provided the opportunity for new viruses to hop to humans, and then to spread rapidly thereafter due to the close quarters in which many humans live.

When a new virus does successfully infect humans, a major concern is its ability to spread, and novel infections are particularly dangerous because no one has been exposed before, and thus most will not be immune. In this way, an emergent virus can cause an epidemic, where the occurrence of disease increases, often suddenly, above background levels. Worse than this is when a local epidemic becomes a major concern worldwide, making it a pandemic.

2019-nCoV has reached epidemic levels in China, and now the focus of many is to prevent it from becoming a pandemic. As of February 6th, 2020, over 14,000 cases of 2019-nCoV have been confirmed, with 565 deaths. Over 98% of these cases have been in China, but infections have been identified on 4 continents and in 25 countries, with 12 casesin the US. This situation is currently evolving, with the numbers changing on a daily basis, so be sure to check updated sources like the World Health Organization for the most current statistics.

We are a science communication project intended to convey readable, simplified digests of current immunology research and their context in the field.