An Unlikely Anti-Hero: The role of autoantibodies in long COVID

Have you ever seen a movie or read a book that had a twist ending where the supposed “good guy” was the villain or an anti-hero? This plot can occur during the body’s immune response. Our immune systems are intended to defend us against pathogens, such as SARS-CoV-2, but sometimes it accidentally turns on our own body to cause harm. In the case of long COVID, researchers have recently seen evidence that this is the plotline unfolding with autoantibodies playing a starring role. Before we dive into this research, let’s walk through some background information on our main characters: long COVID and autoantibodies.

Long COVID results in symptoms that linger in individuals for weeks or months after suffering from SARS-CoV-2 infection. Some of these symptoms include loss of smell and taste, fatigue, shortness of breath, brain fog, and blood clots. Long COVID can ultimately result in damage to multiple organs including the brain, heart, lungs, kidneys, and vascular system. And this disease doesn’t occur only in hospitalized individuals – prolonged symptoms have been documented in those who had just mild cases of COVID-19.

ACE2: a gatekeeper of inflammation

Arthur, et al. set out to understand the role of autoantibodies against the host protein, ACE2, following SARS-CoV-2 infection and how these autoantibodies might contribute to long COVID. ACE2 was of particular interest to the researchers for multiple reasons. First, ACE2 is a host protein that SARS-CoV-2 recognizes and uses to enter our cells with its viral spike protein. Think of ACE2 as the lock on a door and the viral spike protein as the key that SARS-CoV-2 uses to unlock the door and access our cells. Once inside, SARS-CoV-2 hijacks our cell’s machinery to replicate itself and cause disease. In addition, ACE2 has a role outside of infection to decrease immune activity and prevent self-inflicted damage to cells. A loss of ACE2’s normal function can result in a heightened inflammatory state.

Over the course of acute SARS-CoV-2 infection, ACE2 becomes bound by the virus, preventing it from carrying out its normal anti-inflammatory job. This in turn can result in immune system-mediated damage. Thus, COVID-19 pathology is often characterized by heightened levels of inflammation. A state of hyper inflammation is still observed during long COVID suggesting ACE2’s role is compromised. Armed with this information, Arthur, et al. hypothesized that in long COVID patients the immune system generates autoantibodies against ACE2 in the form of anti-idiotypic antibodies that target the anti-spike protein antibodies generated during acute infection. 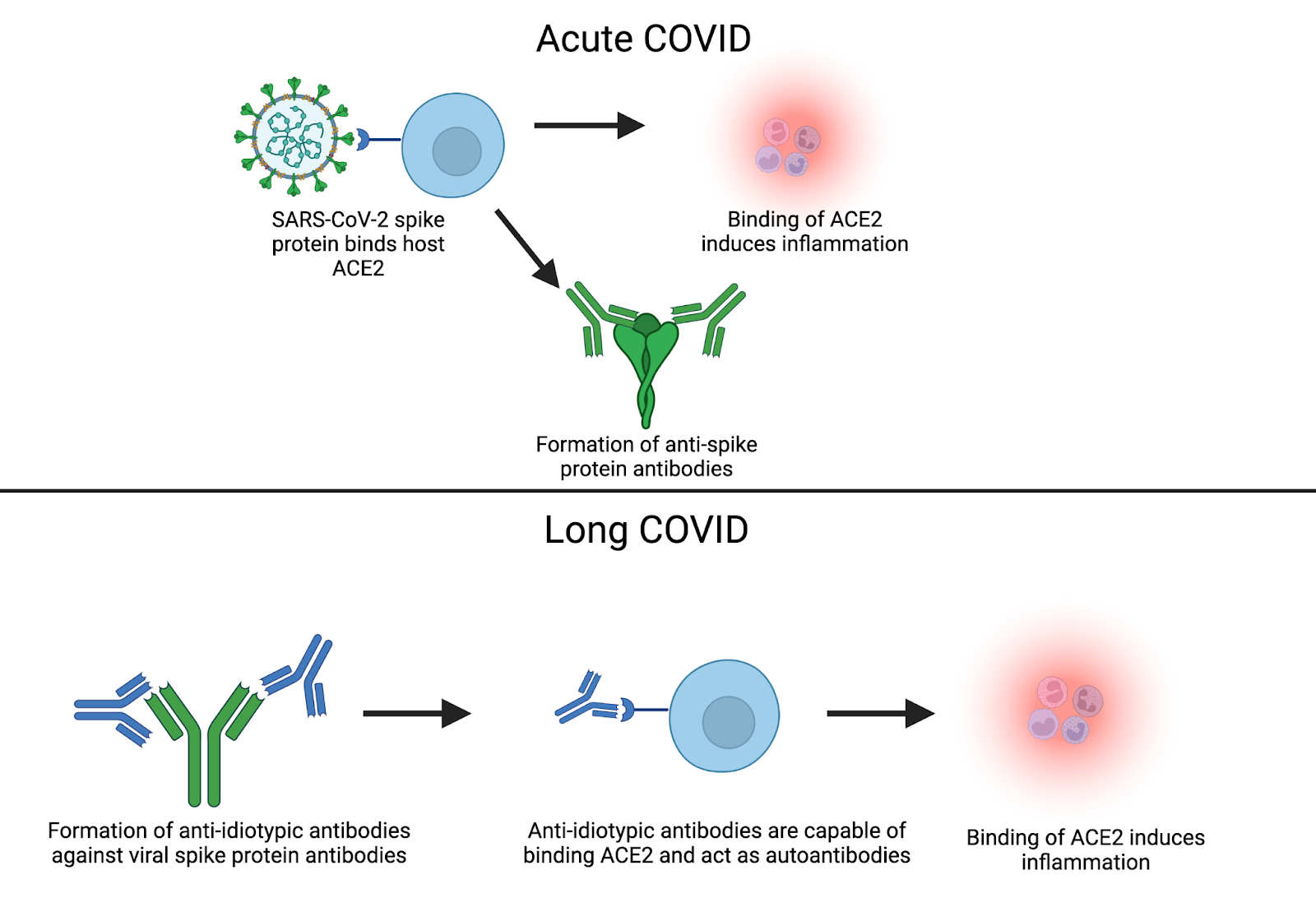