Catch me if you can: The malaria parasite and the human immune system

Summer is sadly coming to an end for people in North America. But elsewhere in Africa, the malaria causing parasite, Plasmodium falciparum, is rejoicing now that the rainy season is in full swing. You might wonder why? In Mali and certain regions of Africa, malaria transmission is high during the rainy season which lasts from June to December. The remainder of the year is the dry season where transmission is comparatively low. This low transmission is a result of mosquito breeding sites drying up, leaving the parasite with no option other than to stay in the human host until the dry season is over. But how does the parasite stay in the human host for potentially months without activating host immune responses? In order to address this question, researcher Carolina Andrade and her colleagues conducted a study in Mali, Africa where they identified that parasites isolated during the dry season are transcriptionally different from the ones isolated during the rainy season

Plasmodium falciparum is a protozoan parasite that causes malaria. According to the CDC, 229 million cases of malaria were detected worldwide in 2019 and roughly 2,000 cases of malaria are recorded every year in the United States. People typically experience fever, chills, and flu-like symptoms but the disease is curable if diagnosed and treated properly. The malaria parasite life cycle involves two hosts – humans and the female Anopheles mosquito. This parasite cycle is an example of an indirect life cycle where humans act as intermediate hosts. Inside the human hosts, the parasite does not reproduce sexually but produces non-reproductive forms of the parasite. Mosquitoes act as definitive hosts where parasites reproduce sexually to complete their life cycle. When an infected mosquito bites, it also injects infectious parasites into the human host. The infective stage of the parasite is called a sporozoite. These sporozoites infect liver cells, where they mature and release more parasites. The second stage of the parasite is called Merozoites. Merozoites are daughter parasites that infect red blood cells (RBCs) and undergo asexual reproduction inside the blood cells. The duration of asexual development in red blood cells is only 48 hours, but a lot happens during this time. Inside RBCs, the merozoites develop into a delicate, thin ring-like structure roughly 20-24 hours after infection. Following the ring form, they become compact and appear as rounded structures called trophozoites. This stage is typically observed 24-36 hours after red blood cell invasion. Trophozoites further mature into a schizont finishing the 48-hour red blood cell cycle. Schizonts are fully mature parasites that rupture to release more merozoites thus continuing the cycle. These blood stage parasites are the main cause for clinical manifestations of malaria. Additionally, some of the malaria parasites undergo sexual reproduction to produce male and female gametocytes. Gametocytes are specialized cells that facilitate the transmission of parasites from the human host back to the mosquito. When an uninfected mosquito bites the infected human, these gametocytes are ingested by the mosquito, thereby infecting them and continuing the cycle. 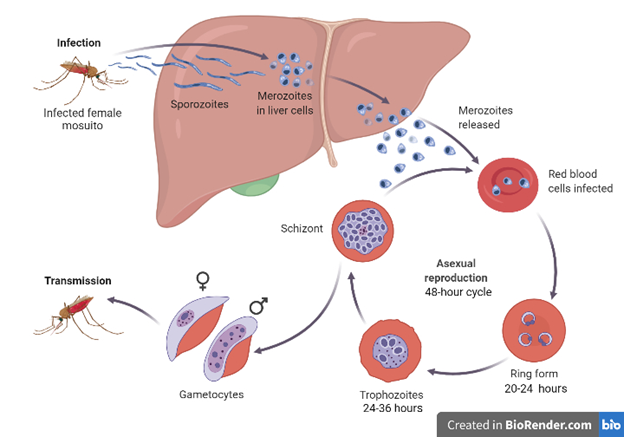 Gathering intel on the antagonist

Consistent with the low number of clinical malaria cases during the dry season, the researchers also noticed that the actual parasite numbers were low during the dry season and high during the rainy season. In order to test whether host immunity is involved in reducing parasite numbers during the dry season, Andrade et al. compared the immune responses of asymptomatic individuals vs non-infected individuals at the end of the dry season (May). Specifically, they compared inflammation markers, cytokines, chemokines, and quantified the proportions of major leukocyte or immune cell populations between infected and non-infected individuals. They found that none of these responses were significantly different. The researchers then looked to see if there were genetic differences between dry season parasites and those isolated during the rainy season. Interestingly, there were no significant genetic differences between the two groups of parasites suggesting the parasites do not shift between seasons. However, when they looked closer, the authors noticed that dry season parasites were transcriptionally different from the rainy season parasites providing some insight into how the parasite adapts itself between seasons.

It is important to remember that our immune system is also an equal and active player in parasite infections. Within hours of invading red blood cells, the parasite remodels the infected red blood cell (IRBC) with its own proteins for survival, thereby altering the RBC. However, any cell that is in circulation must go through the spleen. Apart from being a secondary immune organ that produces antibodies, the spleen also acts as a mechanical filter. A normal, uninfected RBC is incredibly robust and has unique mechanical properties that help them to circulate throughout the body. They are highly pliable and can bend and traverse through the tiny slits of the spleen. Compared to normal RBCs, IRBCs are more rigid, less deformable, and therefore less likely to be able to fit through the spleen.  This results in infected RBCs being filtered out by the spleen for phagocytosis. Specifically, splenic macrophages phagocytose the IRBCs, thereby removing the parasites from circulation. While this is a win for our immune system, parasites have developed mechanisms to evade this mechanism of splenic clearance. Parasite-infected red blood cells adhere to various host cell types and uninfected RBCs, allowing the parasite to avoid splenic clearance mechanisms.

Andrade et al. wanted to further explore the cause behind reduced parasite burden. To this end, they hypothesized that it might be due to decreased parasite replication during the dry season. The researchers then isolated samples from asymptomatic individuals at three time points of the dry season and from symptomatic individuals in the rainy season. Both samples were then cultured in vitro. While the in vitro parasite growth rates were similar for both groups, the number of hours in culture to increase parasitemia was shorter in the dry season samples. Researchers observed mature late-stage parasites (refer Fig.1) after 16-24 hours in the dry season samples whereas these stages were observed only after 36 hours in culture in the rainy season samples. Typically young ring-stage parasites are observed in the first 24 hour and mature parasites are observed at later time points. However, that was not the case with dry season samples. This is a crucial finding because late-stage parasites are rarely present in blood since they adhere to the host cells to escape splenic clearance. Parasites were found to be circulating at a later stage of the 48-hour cycle, suggesting they do not adhere to the host cell.

In conclusion, Plasmodium falciparum persists in the human host during the dry season by allowing for increased splenic clearance. This leads to persistent low levels of infection that won’t tick off host immune factors. By allowing for splenic clearance to keep itself at low levels, the parasite stands a chance to infect more mosquitoes and humans in the subsequent rainy season. The findings from the study add to the knowledge of strategies parasites use to balance transmission and persistence. A better understanding of how parasites are able to switch between the seasons could help in developing better treatments against deadly malaria.